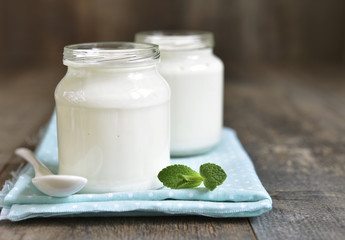 This recipe is a good alternative for people following the GAPS Diet who are unable to tolerate dairy or who have an anaphylaxis reaction which is a true allergy. Dr Natasha Campbell-McBride does not encourage individuals to avoid GAPS fermented dairy unless there is a true food allergy, and this can be determined by doing the ‘sensitivity test’ first. Unlike store bought commercial yoghurt which have shorter fermetnation times with other unwanted additives, GAPS dairy yoghurt is virtually lactose and casein free because the long fermentation process consumes it and removes it. Furthermore, the GAPS introduction diet steps are designed to introduce dairy slowly and gradually by introducing whey first.

Print Recipe
Coconut Milk Yoghurt
Making your own coconut yoghurt is simple and cost effective. You can choose how probiotic you want your yoghurt to be by extending the fermentation length time and by what culture source you use. We recommend you select a starter culture with a good selection of beneficial probiotic strains. You can even use kefir grains to make kefir instead of yoghurt with this recipe. GAPS Diet Australia have a good selection in their shop, however if you have a good strong multi strain probiotic of your own, you may also use that for your starter.

Your yoghurt should smell and taste sour like yogurt. If you notice a bad odor, mold, or hints of grey or pink on the surface, we suggest that it has been contaminated with bad bacteria overgrowth and advise to throw it out and try again. This can be caused by a number of things:

Unlike nut milks, most coconut milk sources do not require added honey during the incubation period to feed the fermentation process as the coconut milk usually has it’s own sweetness.  However, we can’t control what milk source you choose to use so adding honey during the preparation before the incubation period will be something you may need to experiment with on your own.

Coconut yogurt produces a thinner and runnier yoghurt viscosity compared to cow’s full cream milk yogurt, but there are two ways to thicken it: Add a dissolved thickener like natural gelatin to your milk before fermentation, OR after fermentation, strain the yoghurt and drip all the liquid whey out of your yogurt using a cheesecloth.

Once fully cooled, your yogurt may separate again, with some of the coconut oil hardening on top and a clear or cloudy liquid on the bottom. This happens especially with homemade coconut milk which hasn’t been homogenized and emulsified with factory machinery. This is usually not a problem, as long as everything else smells and tastes right. Just mix well with a spoon or stick blender, and enjoy.

Some new tetra-paks of coconut milk are not appropriate for making yogurt because they are mostly water and very little fat. Choose a high-fat natural coconut milk or cream made for cooking.

Use the same ingredients to make kefir by switching the dairy starter or probiotics with kefir grains and follow the kefir recipe instructions.  This is best made in one large container though (not individual jars).