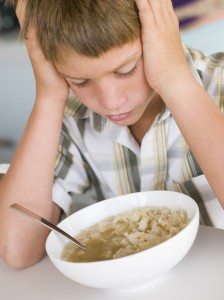 Question: My child is a fussy eater and self limits his diet.  How am I able to get him to eat the GAPS food?

This is one of the more common questions I am asked and understandably so.  This was my number one question too.  I sought answers everywhere including standing up at seminars and asking several experts how this could be achieved yet fussy eating was an understatement.  I wanted my son to eat these healing foods but I asked myself,   “How could he achieve this with his extreme food aversions and oral sensory issues?”

He would only eat 5 foods so we gave him the GAPS alternatives to what he liked like crumbed chicken nuggets with almond meal cooked in lard.  (Big mistake) He ate it but it was by no means providing him with healing foods.  All it did was eliminate the offending foods he needed to avoid and provide him with self limiting alternatives.  He did have withdrawals from dairy and grains and seemed to do much better without them but he was just plugging along with his fussy little eating habits and made very little progress.

It was not until I decided to implement strict Applied Behaviour Analysis (ABA) strategies (explained in the GAPS book under the chapter marked ‘it’s feeding time! Oh, no!’) to see if we could get him to eat the things his little body desperately needed that we saw an amazing change.  I thought if I was going to do this, I needed to commit 100% and be well prepared, firm and consistent with my approach.  The other key factor was to not give in to him and avoid giving him any other food if he refused to eat what we offered.

ABA needed to be planned with realistic goals and highly motivating rewards.  We strategically designed some intervention tools tailored to his needs that we knew he could work with and enjoy.  With the use of the tools and ABA strategies we started to introduce the new foods with the GAPS Introduction Diet.  All we gave him for two weeks was homemade soup and meat stock.  This was very difficult to give him as he gagged, screamed, self harmed and vomited.  When he learnt that he could get a reward that was highly desirable he complied with our requests.  We worked as a husband wife team together in the first few days in doing this.  After a few days he began to detox and got sick with some symptoms getting worse.  He even went off eating his food altogether which we latter learnt was common at this stage.  Although this was worrying, we nursed him through the detox stage as if it was a bad virus or flu and gradually continued with giving him his soup and stock in small amounts until he could tolerate it.  By the middle of the second week, he asked for seconds and then thirds and we thought ‘hey ho stop your belly is full now’.  He actually wanted and desired the food that he completely struggled with only ten days ago and wanted lots of it.

On the second week we started him on stage two of the GAPS intro diet with lamb casserole and vegetables.  We got all the ABA tools and items out ready to go through it again but to our amazement he ate it and was really enjoying it without any ABA intervention.  He then wanted to eat bananas and other fruits and foods that we could never get him to eat before.  I did not think he would eat the banana so I gave it to him and to my surprise he ate it and asked for another and then asked for an apple.  Unfortunately we could not give him the second banana or any other fruit because we wanted to stick to the intervention plan.  I never would have believed it if I had not seen it with my own eyes.  It was at this point that I said to my husband “parents need to know this!”  So here I am telling people that it is possible and they can do what seems impossible to achieve.  As a result, I have had the pleasure of watching many other committed parents who thought it was not possible, to see their own little fussy eaters transform in ten days.

If all it takes is 100% commitment from parents, good healing food, an individual ABA plan with a few dollars spent on some very motivating rewards, then it is well worth it!  I would have paid hundreds just to have someone get him to eat some nourishing foods but instead we did it ourselves and all the money went into our son with his rewards.  If you think that you can do this then I strongly support your success as I have seen others achieve this who thought it was not possible.  There is something about the healing properties in the meat stock and soup that begins to repair the microvilli and entrocytes in the gut wall that consequently interrelate with the mind, taste and adjustment with sensory issues with food.  It somehow changes all this so it is well worth the effort to give it a go.

I know it can be more difficult with older children but where there is a will there is a way.  Just keep talking to your children and educate them if you can.  You know your child better than anyone else and you will find the best motivators and strategies to implement an ABA plan if you wish.  Remember, the best desired outcome for fussy eaters is achieved by combining ABA with the implementation of the GAPS Introduction Diet.

Have faith, give it all you have and think of food as your love.  What do you have to lose?